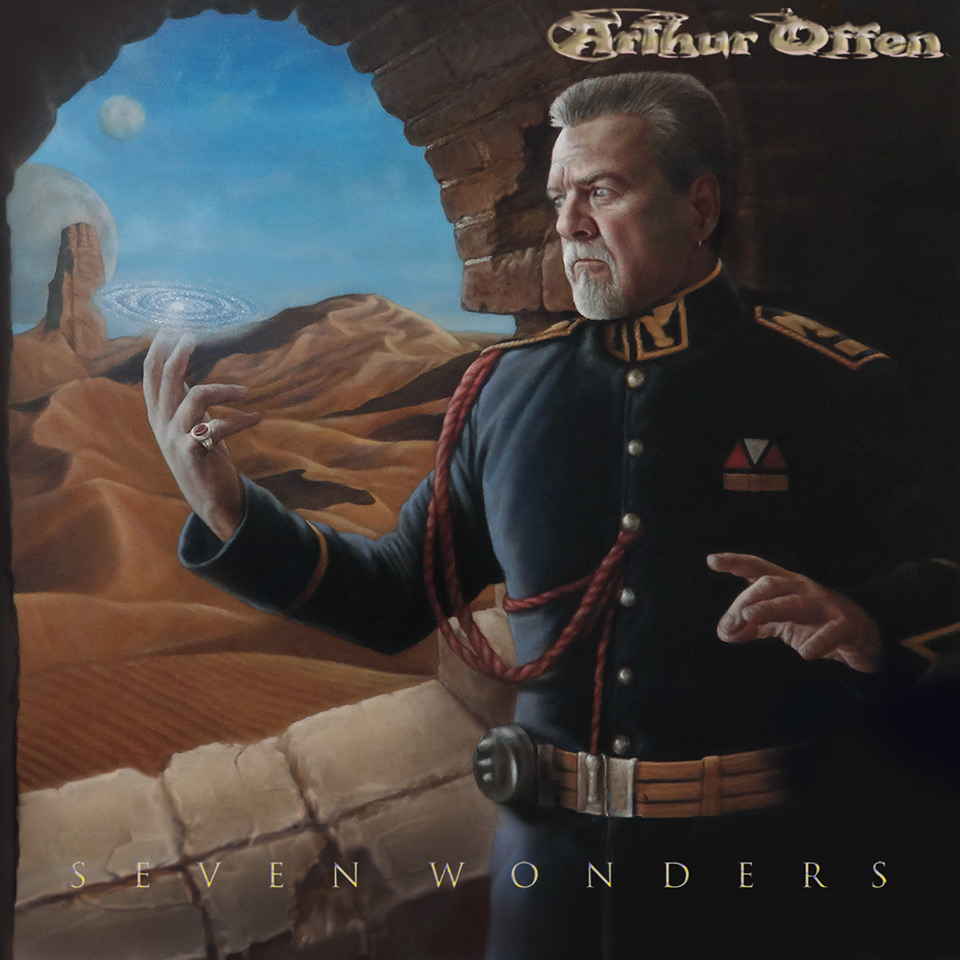 Seven Wonders is in all truth the fourth 'solo' album adventure I have recorded from the pursuit of and the gift of hearing a book of songs. Along side the hard work of mining the heart and soul for poetry while listening to that inner melody, the thrill of arranging for rock and orchestra becomes the real task at hand. You're finally guiding a complete songbook toward creating a finished recording. With the help of Rick Hinkle (a real John Paul Jones style arrangement genius) I finally started to define my new songs as solid pieces with titles by summer 2014.

The three albums that preceded Seven Wonders are called the 'The Flag Tryptich'. 'Across the Stars', 'Book of Conquest' and 'Perihelion'. These albums represent an enormous arc of my songwriting. The recording, arranging, story telling and poetry atop my songbook titles at the time was a 22 year obsession starting in 1994. All three albums live under the band name of 'Flag' and were about five years apart in their production. More importantly, Seven Wonders marks the fourth album I have performed and recorded with Tom Waltz and Rick Hinkle as studio player /producers along with three tremendous drummers (Jon Sherman 1, 3, Steve Pace,2 ) and now Jimmy Porter on this new set of tunes, an amazing drummer and old friend. The really interesting part is that in all that time almost all the same people have always been involved.

Is “country-prog” an approved sub-genre? Is it even a thing? In the hands of singer, musician and poet Arthur Offen, it’s a very potent and affecting thing indeed. -Teamrock.com

I was very sure from the get go that this would be 'a real person with a face' style solo record for what it's worth. Those long ago days of the Flag story centering around a lonely soldier's return from the 'Battle of Orion 2415' were finally complete. The big surprise for myself was that the transition from 'band name' to living artist was such an easy gravitation for me. I am still, (and will always be) the story teller writing down the words and rimes whether I'm the scribe to the Pharaoh or the messenger at Thermopylae or maybe some court jongleur on a distant world. All in all this set of songs and poems feels very much like the galaxy I have always looked out on from my heart's window.

At the beginning of 2014, I was already pursuing seven 'Big' songs. The progress I was making on all them was going well musically and lyrically. All the while I had a relentless bug in my head about finally finishing an epic " Close to the Edge" style piece from bits and pieces of an ongoing set of piano changes that had been driving me crazy for many years. It was about the Arthurian legend so I wrestled with the fact that the story had been beaten to death during my lifetime. How could I give it a new glow?

“Arthur has put together an album that requires your complete attention, as there is so much torevel in, from the inspired lyrics and it`s grand, lush arrangements.” -Malcolm Smith

I absolutely could not find a way into an Arthurian world with a lyric bit. I started this writing this piece in 1978! I had a really good beginning and a strong piano verse chorus change up but that was it. Remember, I was 28 years old when I wrote it and I never got much further than that for almost 37 years though it was always spinning around in a never ending song orbit! ...where do I go with it?....what next?

Gradually in mid summer 2014 I started writing down what would become the first verse of 'The Holy Grail'. I was psyched! The tiniest window will sometimes let you in on a fully completed world. That is exactly what happened! More importantly it would take place in the times AFTER the fall of Camelot. I started writing out scene after scene. I started eventually rehearsing what became 'Grail Cycle' and all of the seven other songs with Jimmy Porter about this time and I knew I was finally on my way to something worthy of a very wide screen sound.

In September I visited an old friend in the south of France and the rest of the Grail poetry just tumbled out. A really magical time as you can imagine. We recorded basic tracks in mid November in Boston and went back again to record some last minute bits as well as the addition of 'Into the Great Beyond'. This song was a late comer to the set and I was thrilled to have it. That one song seemed to somehow smooth out the entire set and became a great way to kick off the running order.

From mid March through mid September I over dubbed all of the many parts on every song with Rick Hinkle who's playing and production help is everywhere on this album. Chris Cornish helped produce much of my singing as well as assisting with his wonderful harmonies. As always Spencer Kirkpatrick is in there as well on acoustic and Les Paul. Those were wonderful days and very hard work!

Tom Waltz commenced mixing all of it in early 2016 and worked through the winter and was mastering by early spring. Tom is the most important musical partner I have besides Rick Hinkle. Not only is he the consummate tracking engineer, he is also a great sounding board for me as he knows so much about my world, the things I love the most about instrument tone and production. On top of it all he is a musician. His ability to get exactly what is needed is relentless.

Arthur Offen delivers the goods on an album that is absorbing and, at times, positively astonishing. -Mwe3.com on Seven Wonders

At the end of the day his amazing mastering is the final polish he adds to his already spectacular mixes. A heart felt thanks to Tom Waltz, Rick Hinkle, Chris Cornish, Spencer Kirkpatrick for helping to make Seven Wonders the experiencethat it is. Arthur Offen late Summer 2016.